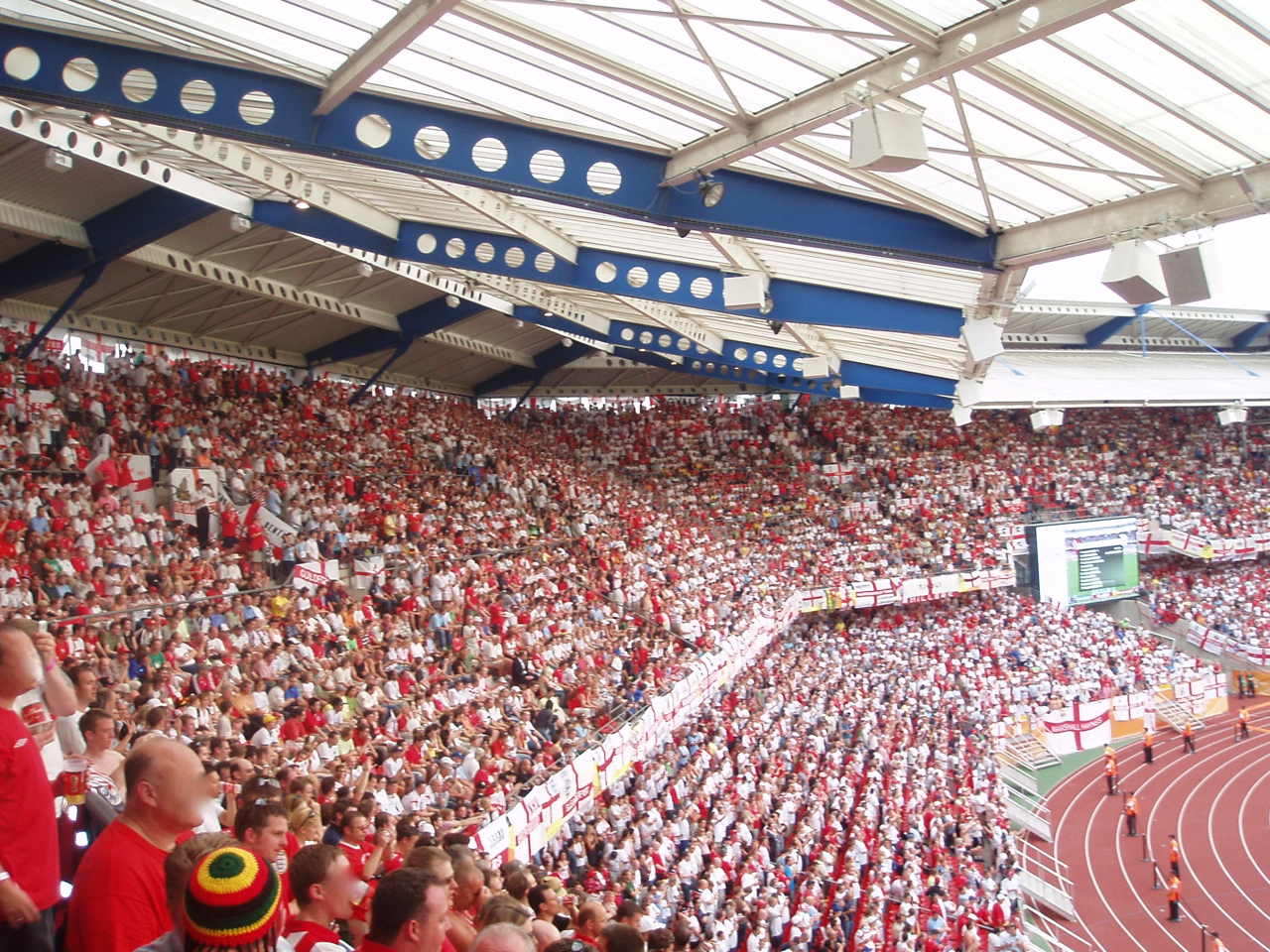 The 15th June, 2006 was probably my best ever day at work! I had been given the opportunity by T-Mobile UK to travel with a group of customers who had won a trip to Nuremberg to see England play Trinidad & Tobago in the football World Cup. This World Cup was going to be the biggest and best ever. The English flags were hanging from the houses and pubs of the entire country. We hoped for great things from the likes of Beckham, Gerard, Rooney, Owen and Lampard. We thought that as long as we didn’t find ourselves in a penalty shoot-out with Germany, then we should do okay! 🙂

I arrived at a private hangar situated in a quiet corner of London Stansted airport, far away from the main terminal buildings. There were about two hundred competition winners gathered there, each assigned to a T-Mobile representative for the day. Breakfast was served whilst the T-Mobile chartered plane was prepared for departure and after a fairly short flight, we landed in time to enjoy the blistering midday sun and a very warm welcome from the locals.

Germany was clearly delighted to be hosting this magnificent competition.

We boarded our vintage style buses – which were presumably built before air conditioning had been invented – and drove into the historic centre of Nuremberg where the cold beer was much appreciated by our somewhat thirsty guests! Thankfully, we were shielded from the hot sun by the England flags that were draped all around the outside of the terrace bar where we spent a very pleasant couple of hours.

Then we boarded our old bus again and traveled to the Hilton Hotel, which was nearer to the ground and also where the Trinidad & Tobago team were staying. From here we watched some familiar players from the English leagues doing their pre-match warm up on the running track that our bar overlooked. One of my customers managed to get a picture with Dwight Yorke, the Trinidad centre forward who was well-known from his days at Aston Villa and Manchester United.

Our customers had each won two tickets and brought along someone special with them. I was looking after a father and son from Sevenoaks, a man and wife from Leeds, and some lads from Sunderland, Liverpool and Cheshire. This was clearly going to be a day they would remember forever and I was regularly asked to take photos of them on this momentous occasion. It’s hard to believe that this recent World Cup was before the word ‘selfie’ had entered the English lexicon and before the first iPhone had been launched. How different it would be today!

We enjoyed some more drinks and a meal at the hotel, after which the anticipation and excitement started to become very noticeable. By this point, there were about three or four hundred supporters gathered outside the hotel ready to make the short walk to the ground. We all followed the large magenta coloured hand which was held high in the air by our local representative, who guided us like a marching band as we paraded along the street singing the familiar England songs. We arrived at the ground in good spirits, making lots of noise and fitting in well with the forty thousand others who were gathered there from England and the Caribbean.

The game was not the best but the crowd entertained itself, playing drums, trumpets and trombones with lots of singing and dancing too. Eventually, in the eighty-third minute, Peter Crouch headed home from a David Beckham free kick and then Steven Gerard sealed the victory with a very late and superb goal. That meant England was through to the knock-out stages of the competition. The relief in the ground was palpable.

We then walked back to our vintage bus, which was easy to find in the busy car park with its large magenta ballon floating high above, and drove back to the airport to board the aeroplane that took us home to the UK. During the flight, we were entertained by a hostess who got one of the lads from my group to do the safety demonstration to the sound of her soft French voice. One of our marketing colleagues then took the microphone and continued to keep everyone’s spirits high with a selection of his witty anecdotes from the day. As we prepared to leave the airport late that night, I was embraced by several customers who’d had the time of their lives.

I felt so proud of our company, and it was probably no coincidence that two and a half years later, I decided to move to Germany to work for Deutsche Telekom, where I can often be seen in my magenta coloured trainers and running top!

And it’s incredible how quickly these events come around. I now have lovely memories of watching the tournaments held in South Africa, Brazil, France, Poland and Ukraine all from here in Germany, often on big outdoor screens with cold beer, warm weather and friendly banter.

I even allowed my friends to paint the German flag on my face for the last World Cup Final and celebrated with them and thousands of other locals when Germany won!

And now I can’t wait for the 2018 tournament to begin.

I hope you all have lots of fun watching it, wherever you are and whoever you support!

This site uses Akismet to reduce spam. Learn how your comment data is processed.